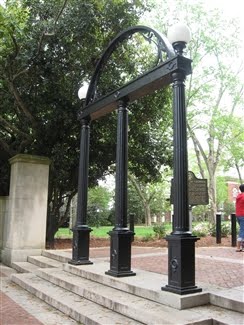 Duke sucks!
Posted by Dawgfan17 at 9:56 PM No comments: Links to this post

Van Gorder to be DC at AU

The AJC just reported that Brian VanGorder is leaving the Falcons to be the DC at AU. That is a huge step up for AU at that position.
Posted by Dawgfan17 at 3:14 PM No comments: Links to this post

The Good, The Bad, and the Ugly - Outback Bowl

During the Outback Bowl against Michigan State there was a lot of good, a lot of bad, and way too much ugly. Here is how I saw it

The good: Aaron Murry throwing for 288 yards against a top five defense. Malcolm Mitchell 7 catches. Ken Malcome with 12 carries for 51 yards. Brandon Boykin with a safety, a punt return for a TD and pass catch for a TD. Tavarres King with a Georgia record 205 receiving yards and a remarkable 34.2 ypc on 6 catches. Jumping out to a 16 point lead. Bouncing back after blowing that lead twice to take the lead back both times. Forcing 3 turnovers against a team that seldom turns the ball over.

The bad: Averaging 1.3 yards per rush as a team. Allowing Hill 30.5 yards per return on his two kickoff returns (the other three Michigan State returns were for a combined 31 yards). Averaging only 15.7 yards per return on our own kickoff returns. Two for four on field goals. Nine carries for 0 yards. Yes I know Samuel was coming off a long layoff and the offensive line was not doing the running backs any favors but Malcome managed to average over 4 yards a carry behind the same line. I will touch on this more once the bowls and signing day have come and gone but after the UF game earlier this season I heard a lot of talk about Samuel coming into his own. He plays hard, I love the guy, he is a DGD, but he is not an SEC running back.

The ugly: Choosing to go for it on fourth in one early in the game then wishing you had those three points you could have taken in a game that went to overtime. Throwing a pick six up 16-0 with your defense dominating the game. Blowing a 16-0 lead. Blowing two fourth quarter leads. Missing a field goal to win the game in overtime. Missing a field goal to tie the game in overtime. Taking a knee for a loss to not give your struggling kicker an easier shot at a winning field goal. Speaking of which, in a year that the team as a whole bounced back from a dreadful 6-7 campaign what in the world happened to Walsh? He went from one of the best kickers in the country for two straight years to a guy who may have been the least reliable on the team and the worst (percentage wise) kicker in the conference. I hope he gets his head straightened out and catches on as a free agent for an NFL team.

The ugliest: Having negative total yards in overtime.

I am sure there are many things I missed
Posted by Dawgfan17 at 11:23 PM No comments: Links to this post

For everyone who loves to pass up 3 sure points

Everyone watching the game at my house with me kept telling me to shut up about us going for it on fourth down and passing up the short field goal. That type thing has a tendency to bite you in the ass. Hey at least the crowd that thought Richt screwed up last year by kicking a field goal early in the game instead of going for it can be happy. I am old school though, take the points when you can get them. There is a lot of other reasons we lost that game. Walsh missing two field goals in overtime hurt. Though maybe if we gain ANY yards he doesn't have to make 40+ yard field goals. Also with a 16-0 lead Murray should not have thrown that pass, take the yards he can get running slide and live to play another game. That play turned the game around. I will have more on it tomorrow for now I need another drink, or eight.
Posted by Dawgfan17 at 5:23 PM No comments: Links to this post

Finally it's game day - Keys to the game - Outback Bowl

Truthfully I think there is only two keys to this game, focus and motivation. The team that stayed the most focused during practice leading up to the game will have a big advantage after a layoff from games for a month. Without games to keep them sharp the two teams will have to rely on how well they used their practice time.
Motivation is tied right in with focus. Which team feels this game is the most important to them? Which team feels the most disappointment over having lost their championship game? It is my guess that Michigan State who was coming off a strong year last year would be the more disappointed team as Georgia bounced back from a 6-7 season and ended up losing to an LSU team that no one has beaten. That though is just a guess and there is really no way to know until the game kicks off.
So assuming the focus and motivation is there for both teams, who wins? I think in the end Georgia is the more talented team.
Prediction - 27-17.
Posted by Dawgfan17 at 6:55 AM No comments: Links to this post

Just wanted to wish everyone a very happy New Year. Yesterday was so close to being as perfect a day of football as you can have when Georgia is not playing. First Franklin got put in his place as a coach with a losing record at Vandy. Georgia Tech lost despite the genius of Paul Johnson. Then Virginia had an early lead on Auburn. If the day had ended there all would have been perfect. Then Virginia's special teams because very special, in the wrong way. All in all though this bowl season has been a good one with most of the game close and entertaining. Not always great football but pretty entertaining.
Posted by Dawgfan17 at 8:54 AM No comments: Links to this post

1. Aaron Murray versus Kirk Cousins - This season Murray threw for 9 more touchdowns than Cousins. Cousins threw for 5 fewer interceptions. The yardage was fairly close between them. The running game will still be important but I think the quarterback that is sharper will win the game. The leadership of both quarterbacks after a long layoff and let downs by both teams after losing their conference championship games will set the tone for both teams.

2. Georgia offensive tackles versus Michigan States pass rush - I think that the middle of Georgia's line will be fine. They have done a pretty good job this season no matter who has been playing the guards. The problem Georgia has had is with speed rushers coming off the edge. Glenn and Anderson are both really big bodies that do a great job once they get their hands on someone. The problem they both have is they are built more for interior play and struggle at times with cutting off the edge from some of the faster pass rushers. If they can give Murray time I think Georgia's depth of receivers and tight ends will be too much for Michigan State.

3. Cunningham and Martin versus Boykin, Commings, and Smith - The two top targets for Michigan State have combined for over half of the teams receptions and close to two thirds of their receiving yards. If Boykin, Commings and Smith can hold those two in check it will put a lot of pressure on Michigan State to find someone else to make plays for them.
Posted by Dawgfan17 at 9:50 AM No comments: Links to this post

Most Popular Posts of All Time

Most Popular Posts of the Week